Well played, @HomelandKen, Ken Cuccinelli, Senior Official Performing the Duties of Acting Deputy Secretary of the Department of Homeland Security (DHS), and Acting Director of U.S. Citizenship and Immigration Services (USCIS), well played, sir.  It is good to finally have a DHS official behind the Trump immigration plan and, more importantly, an official, even if he is the Senior Official Performing the Duties thereof, who knows how to play Bureaucrat Game.  Bureaucrat Game is the strategy of implementing one’s favored policy in the bureaucracy away from prying eyes and, more importantly, out of view of the kritarchs who want to make their own immigration policy.  It is getting things done behind the scenes.  It appears Cuccinelli is the wop who brought a knife to the fist fight with the Deep State Resistance.  And the saboteurs don’t like that Ken the Knife is the switchblade of the Trump Administration immigration policy. 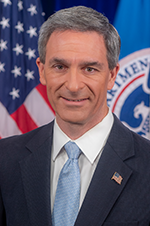 As Texas gears up for what could be its most competitive elections in a generation, tens of thousands of would-be voters are caught in limbo, stuck in a deep backlog of immigrants applying for U.S. citizenship.

Federal immigration officials are taking significantly longer than before to weigh applications, and some cases are now taking a year and a half or more to make it through a process that used to take about six months on average.

In Texas, the number of immigrants working toward citizenship has skyrocketed, outpacing the national surge. The latest federal numbers show that about 80,000 applications were pending in Texas at the end of June — up from about 50,000 in June 2016.

The Trump administration, meanwhile, is taking steps that advocates say will make it harder still for millions of eligible immigrants to become citizens. The administration has proposed raising fees to apply for citizenship from $725 to $1,170 for most applicants, while eliminating existing waivers offered to immigrants who can’t afford to pay. The last big fee increase was in 2007, when they jumped 88 percent to $595.

Sadly though, Cuccinelli is the only official at DHS who appears to be on the side of President Trump.  Single handed, he is fighting the good fight, while ICE SVU continues to sabotage enforcement and Obama retread Mark Morgan is worried about how “raids” will frighten illegal aliens.

This is not to say that Ken the Knife doesn’t have other actions he can take using Bureaucrat Game to reduce legal and illegal immigration.  To this day, USCIS continues to naturalize legal aliens who vote illegally.  Daily, thousands of mostly green card holders who apply for naturalization or other benefits are discovered to have either registered to vote or voted illegally.  Those aliens are supposed to be criminally prosecuted and placed in deportation proceedings, as registering and voting by an alien is both a criminal offense and a deportation charge.  But to date, USCIS does not either refer these aliens for prosecution or place the alien in removal proceedings.  Why?  Ken the Knife can start a full court press on illegal voting by aliens.

Ken the Knife can also stop the defiance of the Trump immigration enforcement policy by bringing ICE SVU under control.  Today, the Dirty 19 remain in control of ICE SVU and are ignoring orders from President Trump to increase interior enforcement.  Also, still not on the books yet, a more demanding citizenship test that would held reduce the number of aliens naturalized.  Your correspondent recommended this two years ago, and word came that there would be a new test, but nothing yet.